To the main page

View of a Military Expert: Why the Towers of the World Trade Center collapsed

The airplanes did not a have true effect on the destruction of towers; they were needed to give an excuse for odd Orwellian wars at the same time when the USA is turned into a police nation, like the German Third Reich, to some extent. The towers took the impacts of crushing Boeing 767's. The towers were originally built to take impacts of Boeing 707's, which are approximately of the same size and was widely used in the 1970's.

Fires that kindled from the fuel in the planes were too shortlasting and weak to be able to severely damage the structure of the skyscrapers. Even in the extreme situation, the heat from a kerosene fire cannot threat the durability of a steel trunk. With the temperature of carbohydrate fires that reaches only 825 °C (approx. 1517 °F) steel weakens at 800 °C (approx. 1470 °F) and melts at 1585 °C (approx. 2890 °F). In the skyscrapers of the WTC the surroundings were not at all ideal as there were far too many steel columns and they led heat away from the burning area. WTC 1 burned for 102 minutes and WTC 2 for 56 minutes only. A fire burning much longer, from 10 to 20 hours, could slowly increase the burning temperature down to perhaps 1100 °C (approx. 2010 °F). Provided there is more substance to burn, such a fire will damage concrete and irons, but not severely heavy steel constructions. 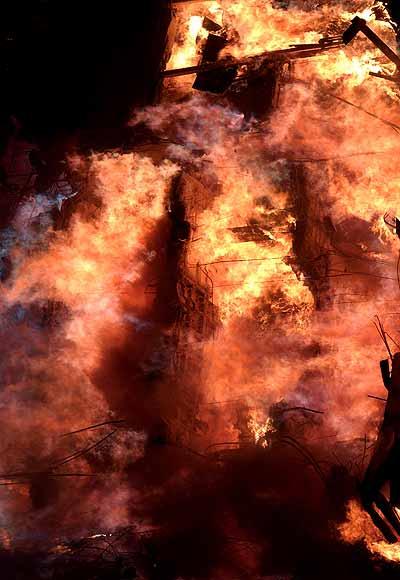 In mid-February in Madrid, the Windsor Tower (see above) burned for over 20 hours, which led to a fire stronger and hotter than that in the WTC, but even the collapses of the Windsor Tower caused by the very strong and long-enduring fire were minimal and limited to the upper floors. If either of the WTC tower had started to collapse because of fires the collapse would have been limited to only a few of the floors and then stopped.

The impossibility of a gravitational collapse is closer seen in other documents. A collapse would produce large pieces, and does not explain reports of fine dust from concrete, huge amounts of dust and pieces of steel ejected outwards.

Destruction of the towers by explosions is clear according to the photographs and reports of the eye witnesses. In the picture below, a range of cutting charges have just exploded in the down left sector and a typical white cloud is formed outwards from the wall. Down right, explosions are seen as well. Even a flame is seen. 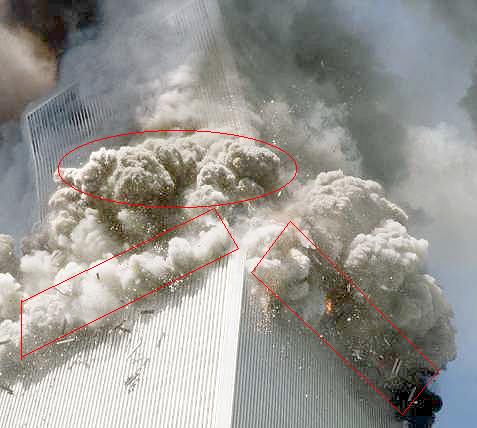 In video tapes taken of the so-called collapses of the WTC, more explosions of these cutting charges can be seen. The explosions advance quickly, with a gap of a couple of floors, cutting the strong steel pillars in the outer wall. The explosions are timed so that it appears that the tower collapses occur in the same timing as in a gravitational collapse. The explosions are not completely synchronized in timing, probably a few charges are triggered by radio, and other charges explode out of the impulses of one of these charges (infrared, pressure wave).

More challenging problems to the demolition men, however, were the central cores of the buildings and the 47 steel pillars more robust than the ones on the outer rounds. The pillars of the central cores were made of steel even 100 + 100 mm thick, thicker than the side armours of a battle tank. Cutting those, even with explosives, is extremely difficult. One would need to surround the whole pillars, every single pillar on every floor intended to get blasted, with powerful cutting charges. These charges would have needed to be placed in such a way that the users of the skyscrapers could not notice these preparations.

As seen in the following pictures, the cores of the towers were not distracted by thousands of powerful cutting charges but by a modern thermonuclear explosive, a small hydrogen bomb. In the picture below, a hydrogen bomb explosion, the bomb having been placed in the cellar and directed to the core, has reached the roof of the tower and the upper parts of the outer walls. On its way up the waves of fire pressure partially penetrated about 100 floors of concrete and steel. Over ten million degrees of heat caused by a hydrogen bomb sublimised all water within the concrete in a moment. Water exploded extremely quickly into 1000-fold volume and totally pulverized the concrete. Even people and computers that were in the buildings disappeared turning into heat and light. That is why almost nothing of them was found in the ruins.

Burning radiation is absorbed in steel so quickly that steel heats up immediately over its melting point 1585 °C (approx. 2890 °F) and above its boiling point around 3000 C (approx. 5430 °F). In the pictures down below, super hot groups of steel pillars and columns, torn from wall by pressure wave, are sublimized. They immediately turn into a vaporized form, binding heat as quickly as possible. Bursts upwards, even visible in the picture below, are not possible for a gravitational collapse or for cutting charges which are used horizontally. 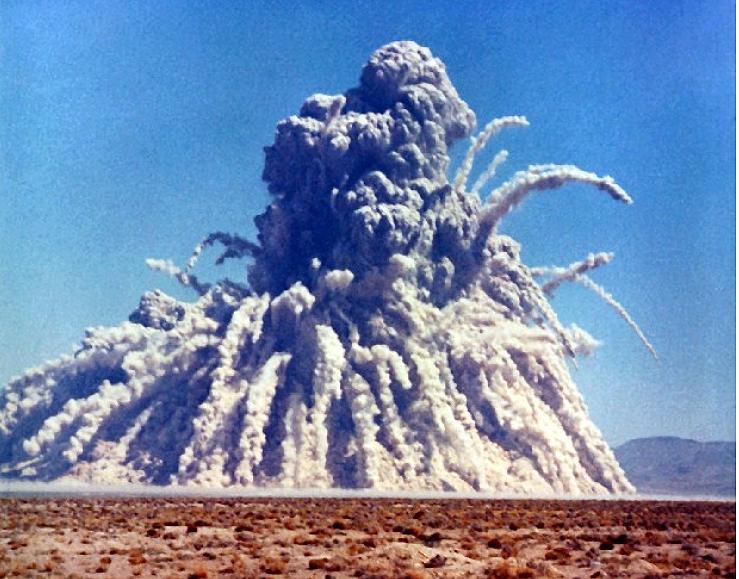 In the upper picture the explosion is in theory 100 times stronger than in the picture below, but in practice the difference is only four times due to the capability of direction of the small hydrogen bomb. 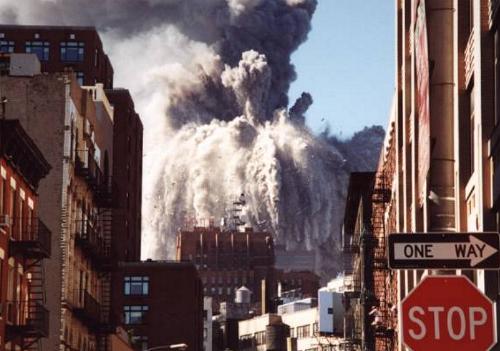 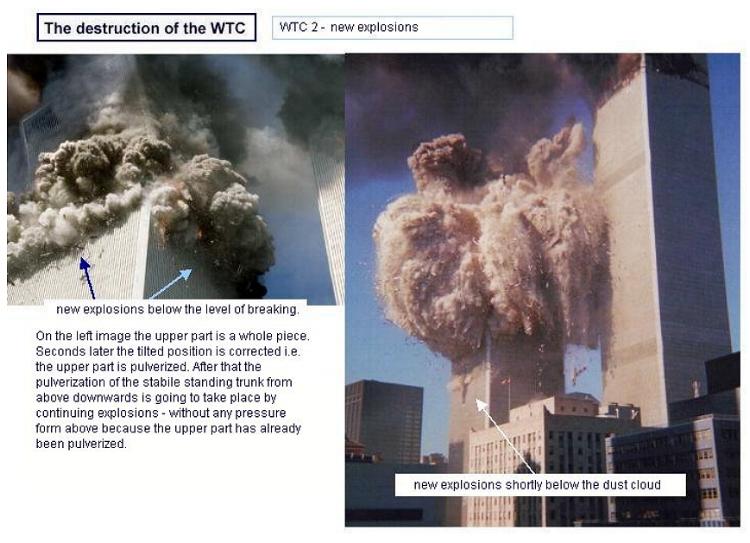 In the picture at the right, the brown shades caused by a hydrogen bomb are seen, while the top of the tower that is already collapsing is breaking down and the posture straightens up as the hydrogen bomb pulverized the core and it lost all its resistance. The piles point the blasts of the cutting charges. (Gehue plate 12) 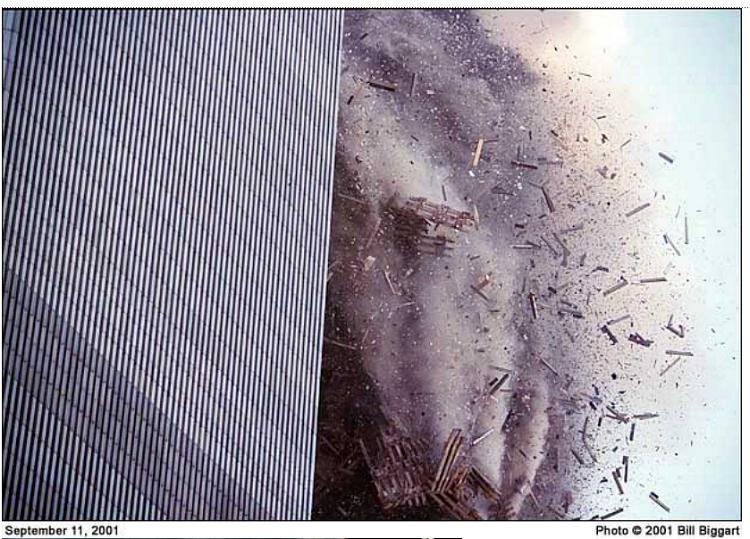 For comparison, pictures of subterranean nuclear explosions where the explosion is blasting onto surface and into the air:

Radioactivity in air creates shades of brown. (The subterranean nuke in the picture on the right is 10 times stronger than the small nuke on the left.) This is the reason why the FBI did not search the crime scene. Ground zeros of nuclear weapons are a health risk and belong to the FEMA.